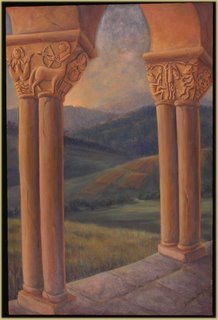 Why is the centaur shooting an arrow at the mermaid? This setting is Galicia, in Northwestern Spain. Home of my father, my cousins, the familial home. I had hoped to teach myself Gallego, the language spoken there. Which is pretty ridiculous; I've been struggling to learn Spanish for 20 years. Still, I managed to spook my relatives by understanding some of what they said. "Be careful", they would say to the neighbors, right in front of me, "She understands Gallego". I wonder what they were saying before they thought I understood.
But my trips to Spain were abruptly halted when Wil developed Lewy Body Dementia. I want to drill that into everyone's head...maybe literally. Those damn lewies destroyed his life and mine. And forget about the happy dementias, like Alzheimer's, where the person forgets everything. No, he remembers a lot. But how it all fits on the streets in his world I have no idea. It's not exactly a nightmare. More like an amusement park. Horrors set in stone. Retribution for what sins?
Posted by Unknown at Wednesday, August 02, 2006