Head In A Bed 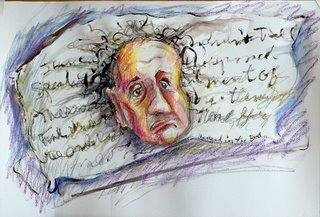 This is a sketch from a dream. In the dream, I am in New Orleans and I get lost in a hospital and find myself on the outer perimeter of the building, where patients who are not worth saving have been left to the mercies of nature. One of these figures is just a 'head in a bed', someone who has lost all their faculties. In my dream, he is really just a head, lost and confused with his hair curling out around him to create letters and words, maybe the words that he himself cannot express.
Someone used this expression years ago about my husband. They said that I would be able to travel again when he became just a head in a bed. Need I say that it was a horribly heartless thing to say?
So far, this has not happened to him. He still smiles and laughes. Not very often and in a very blunted way, but still he surprises me.
It is not his head that is pictured here. It is actually someone I knew as a teenager: Vincent Schiavelli, who died recently. He was gigantic and grotesque and yet he was dating my friend Dolories who was about 4 feet tall. What made me think of him, I don't know. There sure is a lot I don't know.
Posted by Unknown at Friday, January 26, 2007 1 comment:

This was a painting I did a few years back. It's of the Pyrneenes, where Wil and I went hiking on one of our trips to Spain. We were very high up and the atmosphere was thin, thus the strange, penetrating blue of the sky. When we walked into the shadows the air was icy cold, but if we stepped into the sun, like on this bridge over a small river, it only took minutes to get a sunburn.
Wil was having me do all of the driving by then and it took hours to get up the mountain to the park. When we arrived at the entrance there was an ominous sign: over the road and high in the trees, someone had strung bunches of dead animals. Going home our furry friends were still hanging there. It was harder going down the mountain then going up. The tight curves and hair pin turns were hypnotizing after awhile. When we finally came to the highway, my eyes could not adjust and I actually saw the road crawling away from me, an optical illusion after I had so tensely watched the road for so long.
The painting is about 5 or 6 feet tall. I hung it in a show for BWAC and it didn't sell. The day I went to pick it up I was told a young man had wandered in while the show was being taken down and bought it. I was happy but sort of sad too: it is the biggest successful landscape I have done. Imelda
Posted by Unknown at Friday, January 12, 2007 1 comment: 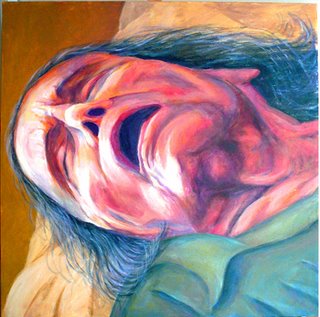 A painting of my mother when the painful times had begun. We didn't know that she had lung cancer, she never complained about any breathing problems. The pain, the unbearable pain of this time was in her legs, where the cancer has spread to her bones. But we didn't know that. It was 'arthritis' and she went to a physical therapist and suffered having to use the very legs that were being eaten away.
We only found out much later what it was all about.
Posted by Unknown at Monday, January 08, 2007 2 comments: 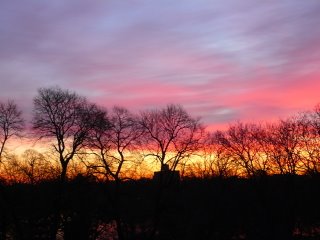 Yesterday was one of those eerie global warming days that we are enjoying immensely in New York. While still laying in bed in the morning, I looked thru the window and saw this spectacular sunrise. Had to jump up and grab the camera.
The whole day oozed Spring time. Crocus' are coming up in the garden. Sad, since we all know the other boot will soon drop and it will be freezing and they will die die die.
Posted by Unknown at Sunday, January 07, 2007 No comments: