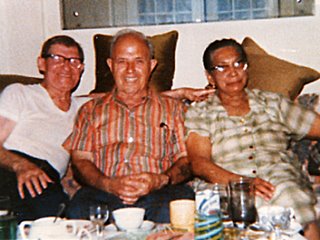 A photo of Mr. Diaz, my father and Mrs. Frances.
When we were kids, was it Easter, Christmas or when? we traveled for hours up to the Bronx, to see Mrs. Frances and Mr. Diaz, an old couple that were friends of my parents. Everything about them was exotic. Mrs. Frances spoke with a gravelly southern accent, like tiny pebbles were buried in her throat. Her face was the warm brown color and shape of a hickory nut.
Mr. Diaz' voice was even stranger. It was deep, resonant, but soft at the same time. He was pale white with bright red hair. He spoke Spanish with my father, a fact that I never registered at the time. That my father was from another country and spoke another language flew right over my head. He and his friends were simply speaking another form of English.
Mr. Diaz and Mrs. Frances' home was just as mysterious. Amidst a labyrinth of tunnels under one whole block of old apartments in the Bronx, they lived in a cellar apartment. We went down some steps, walked thru darkened hallways until, in the distance, the front door to their home gleamed with light. Their walls were cool and white, the rough stone painted over in whitewash.
Sometimes Mr. Diaz would allow us kids to follow him back thru the maze of tunnels to the boiler room. There we stood far back and watched as he removed his shirt and, his skin now gleaming as red as his hair from the fiery reflection, he would shovel coal into the furnace.
It was Mrs. Frances who made the best filé gumbo. Who allowed us to look, but never touch, the beautiful large sugar Easter eggs she kept on a high shelf. In each one, existed a world of lakes and trees and tiny elves and princesses riding winged horses. I wanted so much to be small enough to go inside those eggs.
But of all the curious and strange things about that place, the strangest of all was the shrine that Mrs. Frances had in her bedroom. I had never seen anything like it and somehow I knew it was taboo to study it or ask any questions about it. Later I learned it was a shrine to her dead daughter, whose picture set in the middle and was framed by flowers and candles and holy cards. It surely seemed to be a sacred place, but hidden and not for the eyes of common children.
Mai-Liis shrines inspire me to try my hand at creating homes for the dead who live in my heart. They have that same mysterious power. If you'd like to see them, click on her website in "Links" on this page.
Posted by Unknown at Sunday, July 30, 2006 No comments:

Here's the first post to my blog, Imelda's Brain. I chose my painting "Prophets" to start off with. It was a painting I had hoped to be ' one in a series' and I love the muddy, rocky, stoney look of it.
This painting was from statues I saw on the side of a church in Segovia. It was during a trip to Spain, 2002. I considered it my last vacation because from then on my life changed dramatically.
Generally, I don't think of my life as very dramatic. My husband, Wil, had been diagnosed with Lewy Body Dementia the year before. I cried a lot, for him, for myself and then it came to me: he was still relatively healthy and able to walk. I'd better make hay while the sun was shining. So I planned this trip, just two weeks. I had to pare down my usual grandiose plans. I chose Segovia, a city I had visited many times before but never really spent any time in. And Sepulveda, a nearby hill town that I read also was rich in Romanesque churches. I was on, and still am, this Romanesque kick.
So I traveled with my husband, his brain riddled with those damn lewy bodies, the beginnings of the parkinson's making the word 'hill town', a sad and terrible joke. He had a great time except for the aforementioned hills while I was constantly riddled with fears and worries about him. I had so many trepidations that I even found an internet cafe so I could write to my Lewy Body support group. Somewhere in the middle of complaining to them I realized what an idiot I was. I WAS IN SPAIN! No matter how limited or difficult our trip was, we were there and we could enjoy it. After all, it was going to be my last vacation for a long long time.
So the prophets foretold anyway.
P.S. WHAT! You don't know what Lewy Body Dementia is? Check out http://www.lewybodydementia.org
Posted by Unknown at Saturday, July 29, 2006 3 comments: