I decided to try to make Uncle Loo's famous New Year's Dinner...but just for me. During the winter there was the holy trinity of meals: First Mama's Thanksgiving Dinner, then Mrs. Frances's Christmas File Gumbo and finally , on New Years, this wonderful two part meal: soup followed by all the meats and vegetables that made up the stock. I started with the meats. I used one chorizo, two chicken thighs (I bought the organic kind) and a slice of ham, about 10 oz. I boiled these for 1 1/2 hours in 32 oz chicken broth (4 cups) and another 6 cups of water. A little salt (the broth wasn't low sodium) and some pepper. 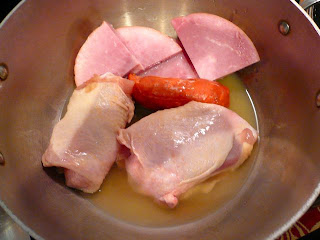 Here's the other ingredients. Yes, I added some carrots and a couple of parsnips I had in the fridge. No big deal. And I used canned garbanzos, including the liquid. I only cut the onion in half and quartered the cabbage. I left the carrots and parsnips whole. 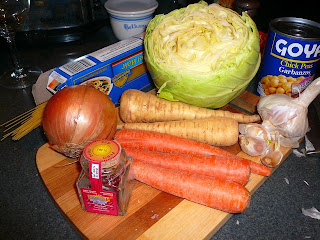 I added the veggies to the pot and a tiny pinch of saffron. I bought my saffron at Despanya and I noticed it was much better quality. I really only needed a pinch. The pot needed a cup or two more of water to cover the vegetables enough. 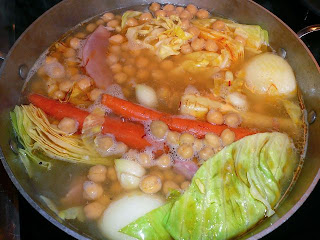 After less then an hour all the veggies were cooked , so I put the meat and veggies in a large shallow pot with some broth to keep it moist and kept it warm in the oven (250 degrees) while I made the soup. 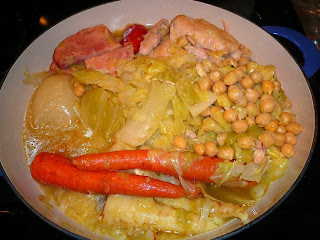 I just added another small pinch of saffron and some thin thin noodles and cooked for about 20 minutes till the noodles were soft. 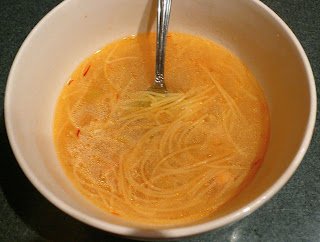 Here's the finished soup. Ok, because I didn't use as much meat, it didn't have the extra layer of fat on the top to keep it scalding hot...but it was plenty hot enough...and DELICIOUS!!! 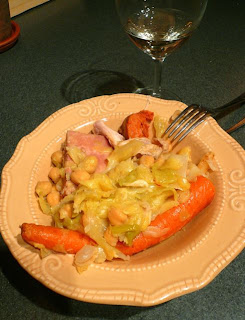 Here's the final plate of meat and veggies. Oh yeah, guys, I left out the potatoes...but you can add them in. I gave myself the same amount I remember getting as a kid: one slice of chorizo (I think there might have been a slice of morcilla too), a little bit of chicken, a small slice of the ham and lots of veggies.
It came out great, it was very filling and it was really easy to make. I think it's more like Dinner for three but you get the idea.
Posted by Unknown at Saturday, January 02, 2010 6 comments: