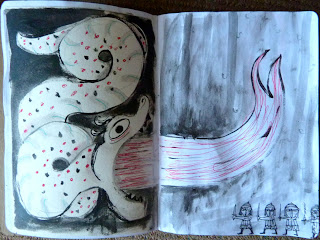 I accidently stumbled across the Sketchbook Project in Williamburg. Went in, got a 'library card', looked at some sketchbooks and decided to become part of 2013's Sketchbook project, which will travel around for a year and then settle down in the same sketchbook project library.
At first it seemed so simple! But then, for some reason, existential angst took over. People looking at my unadulterated sketchbooks seemed like strangers going thru my underwear.
I started off with a bang: A big serpanty critter in the style I often paint in. but then I realized I really didn't want to keep up all that sturm und drang  for a whole sketch-book.  It's all part of that inner/outer stuff. That public/private thingy that I found so boring to listen to but here I am, trying to sort it out. Because let's face it, a sketchbook IS underwear. 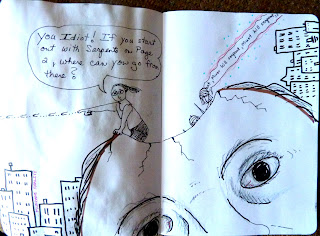