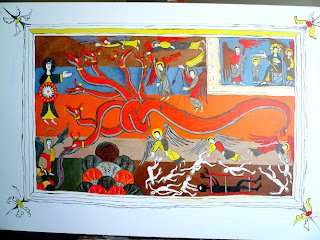 I've continued to work on the Silos painting, and here's the lastest update.
Last week, I went to the Morgan Library with my 2 sisters to see a show about these apocalyptic paintings from Spain so I got to view in closeup how they look and also, how they were done. It's appears to be tempera or gouache and they covered mistakes with white paint, which has held up quite well over the years. They had almost an identical image, with the seven headed beast. Also, they were not as small as I had thought they would be...maybe 24 inches long.
So, here's the update. The painting is not quite as bright as the photo. I'm still learning as I go. Yesterday I had to cover a lot of the detail of the faces that I had done because I needed to white out the too thick lines and other mistakes. But it's all good, as the medieval monks used to say.
Posted by Unknown at Tuesday, May 29, 2007 3 comments: 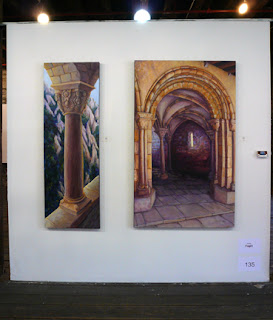 Here's my two paintings for this year's BWAC Pier Show, in Red Hook Brooklyn. Yes, I am a little discouraged that they haven't sold. The large one is really beautifully colored....oh, am I supposed to say they are both beautiful? Well, you always have a favorite child. I do like the other, it's the mermaid image that I saw in France. I did a lot of glazing on it to get the shadowy stone column.
Are artists supposed to be ego maniacs who never say they are discouraged? Certainly I HAVE met a lot of artists like that but I'm not discouraged because I think the paintings are not worthy. It's something about the energy of the show. It seemed very low key at the opening. Que pasa?
Posted by Unknown at Monday, May 28, 2007 No comments: 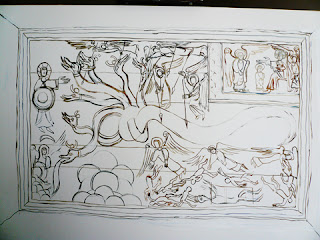 I started work on this idea of mine that I've been mulling over for some time: to paint large versions of those wild and crazy medieval Spanish illuminated paintings of the apocalypse. I chose St Michael Fighting the Dragon from the Silos apocalypse.
This is the preliminary drawing, done directly on the canvas, which is 28X42. I mention the size cause it is much bigger, of course, then the illuminated painting. I just went for it and drew directly onto the canvas with no preliminary drawings. When people say this in books and articles their work always seems suspiciously neat. Whereas I've already run into trouble trying to cover my 'happy mistakes' so as to have that pen and ink look of the original. Not that I'm trying to recreate the original. For one thing the proportions are off, so things are a bit stretched and squashed. But I am having fun!
I decided to just go for it after reading a quote from an artist yesterday who said she chooses what to work on based on the idea: If this is the last piece I do, what do I want it to be?
Posted by Unknown at Monday, May 07, 2007 No comments: